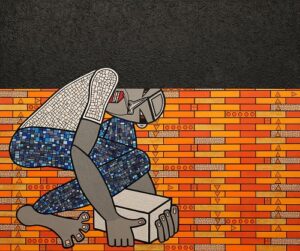 July – November, 2021
Exhibit Opening, Friday, July 23, 6 p.m.
Exhibit Closes, Sunday, Nov. 28, 4 p.m.
Reality Check investigates the concept of diffusion of responsibility with pressing global issues. Diffusion of responsibility is a socio-psychological phenomenon whereby an individual assumes that other people are responsible for taking necessary action. In Reality Check Davis juxtaposes mixed media paintings depicting diffusion of responsibility with works investigating gender equality, racial discrimination, and climate change. The work addresses our unwillingness to listen, our resistance to speak up and our inability to see the imminent consequences of our indifference.

Anna U Davis is known for her bold, colorful mixed-media work, where she explores social inequalities. Davis began developing her artistic practice and her signature Frocasian characters in the 1990’s. Frocasians appear in her art as abstracted grey toned figures which were born out of her interracial marriage. They act as a representation of her belief that everyone, regardless of the color of their skin, should be treated as equals and have the same opportunities in life. Starting from this standpoint, Davis creates narrative work where her characters investigate social inequalities, often focusing on gender relations. A topic Davis explores based on her own experiences growing up in Sweden with her life as an adult in the United States. What started as hard-edge acrylic paintings have evolved into multimedia work which incorporates acrylic paint, traditional pen and ink drawing techniques, cut paper collage, textile and video. Davis’ artwork has been shown in solo and group exhibitions in the United States, Europe and Cuba, including those at The Corcoran Gallery of Art, House of Sweden, Bredgade Kunsthandel and Hemphill Fine Arts. Her work was featured at the 13th Havana Biennial in Cuba and highlighted in the Swedish cultural television program “Sweden!” in 2019. Davis is a member of the review board for the D.C. contemporary art center IA&I at Hillyer and served as a juror for the 2013 Mayor Arts Award in Washington, D.C. Davis is a 2 time recipient of the Pollock-Krasner Foundation Grant and has received multiple artist fellowships from the DC Commission on the Arts and Humanities. In 2020, Davis was featured in the 46.1 issue of Feminist studies, the first scholarly journal in women’s studies founded in 1972. Her work can be found in public and private collections in the United States and in Europe.

Fika in Paint
By Jelena Todorovich

Painting is a daily practice for artist and educator Jelena Todorovich. The meditative act of being in the moment and taking on the challenges each day brings with paint is very similar to her Swedish family’s ritual of Fika. Late in the afternoon it is customary to have a cup of coffee and a something comforting like a sugar cookie to reflect on the day and take a moment for yourself. Jelena has been doing this, but rather with paint for the past several years. Her work can be described as using candy colors, and moments of joy in her florals, landscapes and still life paintings.

Sponsors of our Special Exhibits: