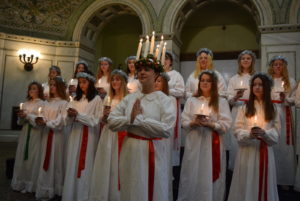 The Legend of Lucia
Lucia is remembered in Sweden every year on Dec. 13, the longest night according to the medieval calendar. On that morning, the eldest daughter portrays Lucia, awakening her parents singing the Lucia Song and serving them coffee and Lucia Buns.
Each year every city, town and school chooses their own Lucia. Even the Nobel laureates are awakened during their stay in Stockholm by a specially chosen Lucia and her attendants.
The real Lucia was born of noble and wealthy parents in Syracuse, Italy in the fourth century. At an early age she vowed to devote her life to serve Christ and the poor. She was a brave Christian woman who nightly brought food to the Christians hiding in the catacombs. As her arms were full of food she wore candles on her head to light the path before her. She was discovered, tortured and condemned to death by burning. Miraculously she did not die and as a last resort she was killed by a sword. Later she was canonized by the church, receiving the name by which she is known “Sankta Lucia”.
There are many legends, but in each one, Lucia becomes the symbol of light and hope to mankind. She comes on the darkest day of the year to herald in the joyous Christmas season. Thus the Christmas holiday begins with feasting, singing and the spirit of friendliness and goodwill to all.

This year the Museum Lucia program is online.
Enjoy this collection from Chicago Lucia past created by Paul Muhr.

At noon there was a small performance in the Museum garden that can be found on Facebook as well as below.