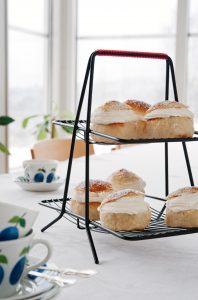 Don’t forget to get your semla (lent bun) at either Swedish Bakery or Tre Kronor. You can then bring it to the tables at the Museum to enjoy it together with the art of Sponberg.

Semlor were originally consumed on fettisdagen, or Fat Tuesday, as a celebration before the Christian fasting period of Lent. In modern Sweden, since strict adherence to Lent has waned, semlor make their appearance in bakeries from about January through Easter. However, Semla Day, or semmeldagen, is still celebrated on Fat Tuesday every year. Adolf Frederick, King of Sweden, died in 1771 after eating 14 servings of semlor. So while indulgence is encouraged on fettisdagen, it might be best to keep your semla intake to fewer than 10!