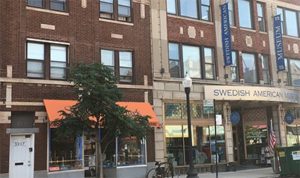 On Sept. 8, 2017 the Swedish American Museum at 5211 N. Clark St., Chicago, purchased the three-story building on its north side for future expansion. “On the heels of the return of our rooftop water tank, this opportunity to grow is exciting to us,” said Executive Director Karin Moen Abercrombie.

Planning has begun for eventual use of the facility when the leases of current occupants expire. In addition to the retail storefront at 5217 N. Clark St., apartments are located on the second and third floors.

The acquisition is independent of current Museum improvements at 5211 that are supported by the 40th Anniversary Campaign. Commercial financing was secured to make the purchase.

Abercrombie stressed the cultural impact of Museum enlargement on enhancing the Scandinavian character of the historic community, where in recent years some local Swedish businesses have closed.

“We are excited with this chance to help continue the work of making Andersonville a wonderful neighborhood with a significant history,” Abercrombie said, noting that the expansion will add almost 20% street level presence for the Museum.

Architecturally, the adjoining buildings are remarkably similar. The 5217 structure was built by Swedish architect Anders (Andrew) Norman in 1914. Sources suggest that he may have been involved in designing the original 5211 building. He also was the architect for nearby Ebenezer Lutheran Church in 1904.