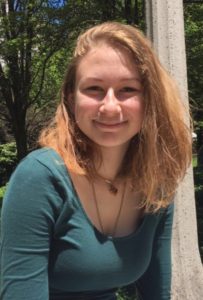 The Museum’s IAC youth intern Renee Freville has been selected as a member of this year’s Fifth Star Rising Star Honor Roll. Renee will represent the Swedish American Museum as a visual artist at the 2017 Fifth Star Honors presented by Allstate Insurance Company.

The event will feature live performances and tributes recognizing this year’s honorees and their artistic work. The City of Chicago will honor outstanding youth with The Rising Star Honor Roll – a recognition program for students who show creative leadership, passion and exceptional skill in the arts.

“Living in Chicago has opened up so many doors and caused me to have so many experiences that I probably wouldn’t have had anywhere else. Anywhere I go there seems to be some type of artistic expression. From Oak Park to the Southside there is always some type of piece that brings people together and shows passion,” said Renee Freville of her hometown. 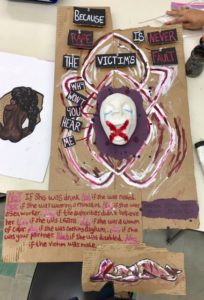 When speaking of her art pieces she submitted for the Rising Star Honor Roll, Renee said, “Growing up as a woman in the United States I never had put much thought into the regular struggles we have to endure. I had always been passionate regarding the topic of sexual assault and continuously puzzled by the assumptions of the victim when the word ‘rape’ is used. It was not until I began working on this piece that I looked back on my life and really thought about every time my mother told me to change my clothes because there are people out there that don’t think like us. Every time I was walking to a friend’s house and I got catcalled. Every time the topic of sexual assault became too shy of a subject to discuss. A dear friend of mine had been a victim of sexual assault. When she finally worked up the courage to tell me, the most heartbreaking thing she said was that she was embarrassed and ashamed that she could not stop it. So in honor of her, I dedicate this piece to every victim that has ever felt sorry or ashamed that they were unable to do anything, because it is not their fault. Rape will never be the victims fault.” 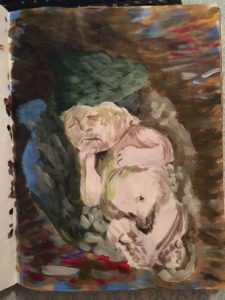 Of Renee’s second piece pictured to the right, she said, “Never completely grow up. It sounds like a silly thing to say, but as we grow older some of us forget the importance of keeping that certain bit of our childlike essence. The inspiration for this piece came when I was walking through a very peculiar garden shop located in the middle of a forest down in Arkansas. I will always remember the beautiful way the sunlight shone through the trees and the smile of various flowers, but the thing that has resonated most with me is this little porcelain fairy baby. During this time I was very stressed about, what I like to look back and call, ‘adult issues,’ and this little porcelain fairy baby, so innocent and peaceful looking, and it stuck with me. Through this piece I wanted to depict an almost dream like, blurry state of mind surrounding the essence of innocence. There might be dark shadows in one’s life, but as long as some tiny bit of hope is kept there will be a light at the end of the tunnel.” 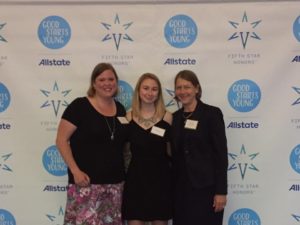 Update as of 8/29/17: The 2017 Rising Star Honor Roll inductees were honored at a special reception at the Chicago Cultural Center on August 22 prior to the Fifth Star Honors show and concert at Millennium Park’s Jay Pritzker Pavilion on August 28.

Stacey Nyman, the Museum’s education manager, inductee Renee Freville, and the Museum’s executive director, Karin Moen Abercrombie are pictured to the left at the Rising Star Honor Roll ceremony at the Chicago Cultural Center on Aug. 22.